Girl and a Goat

A girl wandered around an open-air farmer's market in Podszkle-Bukowina. She had nine hundred złoty and three grosze in her pocket.

How did Girl come to wander an open-air farmer's market in Podszkle-Bukowina with nine hundred złoty and three grosze in her pocket? Bored with her life in middle class America, she decided to cash in her 401K and visit her elderly uncle. Her uncle had written to her, in scribbly old person's writing, what a tragedy it would be if Uncle died and Girl did not know the boundaries of her ancestor's farm. Girl did not care about the farm, but Girl did care about Uncle. After the letter, all she could think about was Uncle — dead.

Girl passed rows and rows of air rifles, knives, shoes, cheese, baby's hats, watches, poorly ironed on T-shirts, erotic underwear, sausages, and furniture. Apparently, one did not have to be a farmer to sell their wares at this market. After buying four CDs, Girl was left with eight hundred and forty złoty and three grosze, the feeling that the CDs may have been burned on a home computer, guilt that the transaction may have been somehow illegal, and either a marriage proposal or an offer to buy watermelons in the parking lot. Girl moved on to the livestock section of the market.

Girl did not realize that twelve chickens could fit in one cage. Girl felt bad for the chickens, for they reminded her of her college apartment. The chicks were another story. She could not resist their yellow fluff, and so, quite naturally, picked one up.

“No pay for bird, no touch!” A sweaty man standing one foot away from her yelled. “No pictures! No! No! No!” He pointed to the camera that hung around Girl's neck.

Girl put the chick down, and inquired as casually as she could about a goat.

“How much is this goat?”

Girl only asked about the goat because the sweaty man made her feel nervous about her camera. Girl reached into her pocket and held out all of her crumpled, colorful bills. The man examined them.

“That is exactly the price for this goat.”

Girl was not trying to be an American baller by making it rain złotys. Girl had skipped many, many math classes, so she could sit in on anthropology and psychology ones. As a result, she was not that good at converting currency in her head with a sweaty man yelling at her in a language she only half knew. Eight hundred and forty złoty seemed like a fair price for a goat. Girl handed over all the bills.

She was now the owner of a goat tethered to a length of brown rope. “Is Goat a boy or a girl?”

“His name is Billy?”

Girl did not want to linger. The sweaty man was busy. Girl got to the edge of the farmer's market when she realized that she had taken the bus. She would not be able to afford her return ticket nor one for Goat. They would have to walk the seven kilometers back to the farm.

Goat was a fine walker. He never lagged behind to eat ditch weeds or ran ahead like a show off just because he had four legs. Girl started to like Goat, even though his eyes — orange moons with black slits — frightened her. This is an easy fix, thought girl. She put her sunglasses on Goat. It was a sunny day, so Goat did not shake them off. Girl thought that, maybe, just maybe Goat liked her, too.

Uncle stood outside, leaning over the fence post. Uncle wore a sweater and a cap, even though it was a sunny day. Uncle's eyes widened at the sight of Goat.

“Have you brought us dinner? He will be tuff, but if I boil him long enough he will make a good stew.” Uncle moved to touch Goat's hind legs. Goat stepped away from Uncle's prodding hands.

“How much have you paid for this goat?”

Girl played with the grosze in her pocket. “Eight hundred and forty złoty.”

Uncle whistled. “You take price of chicken and multiply maybe five times. That is fair price of goat.”

“Goat is not for eating.”

“Why buy this goat? You cannot take him home with you.”

“Uncle, do you have a CD player? I would like to listen to music with Goat.”

“Your aunt had one in the TV room. Please leave the goat outside.” Uncle put both hands in his pocket and started down the dirt road, north, toward the cemetery.

“Would you like to listen to music with us, Uncle?”

Girl tied Goat's brown rope to the end of a dog leash, and then linked the leash to the clothesline that stood outside the TV room. The CD player was dusty, but still in good condition. Girl closed her eyes, picked a CD from her stack, and played it. Girl danced room to room and opened all of the windows. A strong breeze traveled behind Girl, disturbing papers, shadows, family photographs, and Uncle's medicine bottles. Girl spun in circles on the carpet, not understanding any of the lyrics.

“You don't like techno music? What would you know? You're just a goat.”

“Fine. This one?” Girl held up another CD for Goat.

“Okay. What about this one?”

“Et.” Goat stamped both his front hooves on the windowsill.

Girl played the CD. Goat nodded his head, which looked very much like dancing to Girl. Goat liked Polish gypsy folk music. Girl leaned against the wall under the window. She reached up behind her to pet Goat.

“When I was a little girl, Aunt and I sometimes spent the afternoon making pierogies. Aunt would take the leftover dough and make one big pierogi and say, ‘this is the daddy of all these baby pierogies!’ She always let me eat the daddy pierogi.”

Goat climbed down from the window, then returned with a mouthful of weeds and grass.

The CD ended. The sun had set. Uncle returned home and retired to bed. Girl knew he must have been tired because he did not say one word about the open windows or the personal effects that the wind had blown about the house. Girl and Goat sat in silence for several hours. Girl decided she must make Goat a nice place to sleep.

Girl led Goat to the barn. She cut the twine from a bundle of hay and laid the straw down in a corner. Girl patted the bed, to show Goat what a nice place it would be to take a snooze. Goat sniffed the straw and then ate it.

“No, sleep.” Girl lay down on the straw to show Goat what she meant.

Goat lay next to Girl and put his head on her shoulder. The smell of the straw was sweet. It reminded Girl of open fields, and how, when the wind blew over the grass, it sounded like waves crashing on the shore. Girl and Goat slept like this until very near noon when Uncle woke them.

“Are you hungry? I have some meat and cheese on the counter. I ate without you because I could not find you.”

“I'm going to tend the garden. Please keep that goat away from it.”

Girl decided that she and Goat would go for another walk, this time in the forested hills near Uncle's farm. Goat had no trouble with the hill, but the steep incline made Girl's thighs hurt. The sun was high, but the trees, mostly pines, shaded their stroll. Girl told Goat about life in middle class America.

“I feel bad to have so much and still feel that I have so little.”

“I work and work, and when I get home from work, no one is waiting for me, so I work some more.”

Girl stopped and looked around. The trees opened up to a meadow of dandelions. The sight of all that yellow changed Girl's mood. She untied Goat.

Girl and Goat ran across the meadow, until out of breath, both gave way to exhaustion and crumpled under the summertime sky. Goat nuzzled Girl's arm, so she pet him in long strokes down his back, flattening his wayward brown curls. The sun was warm on Girl's face. Church bells rang out from somewhere across the valley. Girl closed her eyes and laid her head on Goat's stomach. The bells continued to ring. Girl smiled.

The days of Girl's vacation passed. Stars were counted, trees climbed, flowers picked, long roads walked. Girl and Goat talked always of matters in life Girl was sorting out in her head. There were nights in the barn where they watched an owl swoop down for mice, and days on Uncle's porch spent reading together in the sun.

Uncle approached Girl the day before she was supposed to go back to America.

“You spend so much time with that goat that you never see boundaries of farm.”

Uncle led Girl to the road. He pointed to the road, pointed to a fence to the left, pointed to a tree to the right, and waved for Girl to follow him. They walked for what Girl thought may have been three city blocks. Uncle stopped and pointed at a large rock that jutted out of the ground. Girl nodded. Uncle nodded. Girl didn't want to ask him what would happen if someone cut down the tree, moved the fence, or dug up the rock.

“You can go back to your goat now. I'm going for a walk.”

Girl knew he was going to the cemetery. “Can I come with you?”

Uncle smiled. Girl wished she had asked sooner. The cemetery was not far away. Uncle pointed to headstones once they got there.

“This is Pawel. He owed me many złotys.” Uncle kicked Pawel's headstone. “This is your great babusia. She was the first in the village to have indoor plumbing. She brought a porcelain tub all the way from Krakow by horse and buggy.” Uncle passed from grave to grave. He knew something about everyone. “Maybe you look around.” There was one grave he had not pointed out to Girl. Girl left Uncle alone by the grave for a long while. When the sun began to set, she crept up softly behind Uncle. Uncle spoke first.

“She is getting visa for me otherwise there will be big trouble at the gates when I show up.”

“Maybe I understand why you buy Goat.”

Girl put her arm around Uncle's shoulders and they walked home in the dark.

The next morning Uncle helped Girl with her bags. Girl hugged Uncle.

“What will happen to Goat?”

“He will make a good stew.”

Girl did not laugh. Uncle laughed.

Uncle raised his eyebrows. He had remembered something. “Are you on book of the face?”

“Good. Maybe now we stay in touch more. I like the interwebs.”

“Uncle, I must say goodbye to Goat.”

Girl had not forgotten about Goat, but this was the task she most did not want to do. She walked to the back of the house where Goat was eating Uncle's garden.

“Goodbye, Goat. I'll always remember you in the smell of hay and the sound of church bells.”

Girl gave Goat one last pet. Without looking back, she left Goat standing in the yard. Girl gave Uncle another hug, gathered her bags, and walked to the bus station. Girl tried not to think of Goat as she got on the bus that would ferry her to a plane, that would bring her back to middle class America where there were no stars to count, no trees to climb, and no one waiting for her. 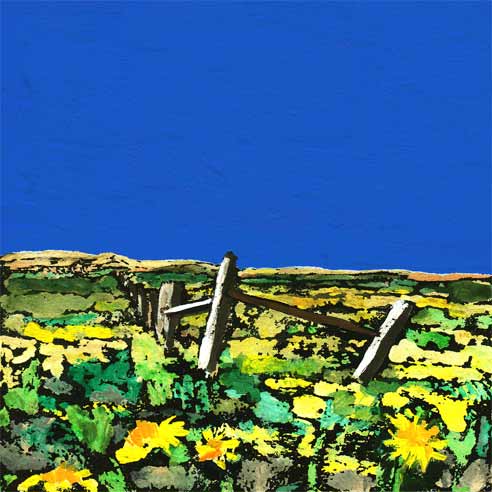 Charlie M. Broderick spends her days writing and avoiding writing. You can read her blog at www.ThatGirlWhoReadsBooks.com or find her on Twitter @ CM_Broderick.